Blue Silver Grass is a grass that grows in all places. It is a tool spirit and is considered a trash spirit by most people. It is the most resilient plant, which was the reason it was used to terraform planets.

This variation of Blue Silver Grass is the apex of plants and as such it gives off an intimidating feeling to all Plant Spirit Beasts and Plant Spirits. It is extremely tenacious and overflows with rich vital energy that results in near-immortality when fully grown. It has a characteristic golden line embedded in the Blue Silver Grass. It has an innate domain called Blue Silver Domain.

A variant form of Blue Silver Grass with golden veins and greater intensity. It was affected by the Golden Dragon King Bloodline. When it first awakened, it looked like any other Bluesilver Grass. By the time Tang Wulin absorbed his first spirit soul, it started to rapidly grow.

The originally weak and frail grass harmoniously curled up and gradually grew until it was about as thick as a finger with an appearance similar to that of a vine’s. Upon a careful inspection, vestiges of scales could be found on the blade of grass. It now possessed a dark luster similar to the Grass Snake’s. Although it was rougher, it still seemed as frail as before.[1] The blade of Bluesilver Grass had grown longer and had become a vine with a golden slender line along it.

It was as if the dull vine-like grass had suddenly gained a skeleton and its tenacity had drastically increased. Moreover, the grass’s dull surface gradually gained a glossy luster with a faintly discernible blue halo and a slender gold stripe. It appeared more striking than before.[2] 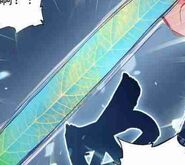 This variation is a Dark Spirit. The Blue Silver Grass is transformed into a vine-like appearance, with countless dark thorns protruding across its entire length. It drains the blood of its victims to death with a mere prick by its thorns. This blood in return is used to strengthen the user.


Cite error: <ref> tags exist, but no <references/> tag was found
Retrieved from "https://soulland.fandom.com/wiki/Blue_Silver_Grass?oldid=74409"
Community content is available under CC-BY-SA unless otherwise noted.