​​1st Class God (二级神) (Overall shall be in the Peak Area)

Peak God King (神王) (In terms of overall strength, he was able to withstand the seige of 13 God Kings level power houses at the same time.) (Sl 4 Raw)

He is the son of Tang Wulin and Gu Yuena, the grandson of Tang San, and he is the inheritor of the Dragon God. 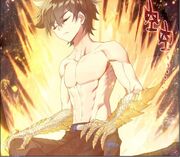 Xuanyu is without a doubt a beautiful child. He has his father's black hair with traces of silver hair to the sides, which came from his mother. He also has blackish-blue eyes in his irises, which he inherited from his father. However, unlike his parents, who are each quite tall, Xuanyu is unusually short in comparison to others his age.

By his teenage period as a Shrek Outer Court disciple, he matures into a notable handsome man taller than most of his classmates (excluding Qian Lei).

It is described by Bai Xiuxiu who witnessed these changes. The first thing that changed the most was the hair color, a long blue hair spread behind his head, which was lighter than her own dark blue hair, which was the color of a tranquil sea. There was also a hint of blue in the eyes, and there was a faint glow of nine colors.

As a child, Xuanyu was described as being "too well mannered". He always did as told and was rather blunt and naive, openly stating how he feels to others. He was also blissfully unaware of all the strange things happening around him. Overall, unlike other Soul Land protagonists, who were forced to grow up quickly, Xuanyu was a genuine child.

However, after meeting Nana and training under her for a while, he matured at a rapid pace. He gained a calm sense towards battle and has shown genuine care for others. As he got older, he began displaying the qualities of a leader as well as being extremely sly and cunning. He also possesses business acumen and became the richest Shrek Student in his year.

During an expedition of a research team in the Northern Lands of the Douluo Planet, they found a golden-silver patterned egg with Insulation of Soul Power of a Hundred Thousand years old spirit beast, during incubation time it hatched, and the level drop to less than ten years old, and a male baby got out from the egg. After hatching, he started to eat the shell of his own egg.

Captain pilot of the team, Lan Xiao and his wife, Nan Cheng returned to Tian Dou Planet together with the team and adopted son, Tang Xuanyu.

When Xuanyu was 6, his Spirit was rank 10, which is the max level innate soul power, he has " Innate Full Spirit Power ". Lan Xiao was worried about his son's safety, so he told Xuanyu to lie about his real power: his initial spirit rank was 3 and he attended school, Tian Luo Elementary Soul Academy - Zi Luo Branch, one year later because of sickness.

Xuanyu studied in Zi Luo Branch Soul Academy for one year and was recommended to advance into Elite Youth Class in Tian Luo Elementary Soul Academy because he was the top of the class (best combat ability and spiritual power), and he passed the entrance exam.

As the Class Leader, Xuanyu becomes the main blacksmith and resources sponsor of his class and 33 Sky Wings for the entire Outer Court class period. The class teacher is Xiao Qi. He gifts each of the other Seven Devils a Heavenly Treasure: Bai Xiuxiu a 10k Years Mysterious Ice Essence, Liu Feng a 10k Years Heavenly Green Vine, Qian Lei a 10k Magma Fruit, Lan Menqin a 10k Golden Yang Flower, and Yuanen Huihui a 10k Fullmoon-Piercing Autumn Dew, taking the 10k Purple Immortal Spirit Mushroom for himself. He also gifts his other classmates Heavenly Treasure to promote their strength as a whole class.

He later becomes the Life Sect's Heir and joins Tang Sect, during which on his initiation day, Xuanyu manages to momentarily be contacted by Tang San.

During his breakthough for Rank 50+, Xuanyu condensed a Dragon God Core from his Dragon God bloodline essence at his chest area with Xiao Bao's support.

With his breakthrough to Rank 60+, Xuanyu condenses a Spiritual Dragon Core in his spiritual sea similar to Huo Yuhao's that also symbolizes his Spirit Domain realm. Once this and his spiritual sea condense and evolve, Xuanyu will awaken the Divine Origin realm.

Retrieved from "https://soulland.fandom.com/wiki/Lan_Xuanyu_(Tang_Xuanyu)?oldid=89307"
Community content is available under CC-BY-SA unless otherwise noted.